Setting up a voluntary group in Sheriff Hutton, as a response to the coronavirus crisis

Sheriff Hutton and Lilling has come together to set up an organisation to help others during the coronavirus crisis.

We thought it might be useful for others to see how this happened. Firstly, it is important to know that Sheriff Hutton and Lilling have a large number of active groups in the villages and that we are known as very friendly places to live. Also, and just as importantly, there are many people who are willing to plunge in and make something work. 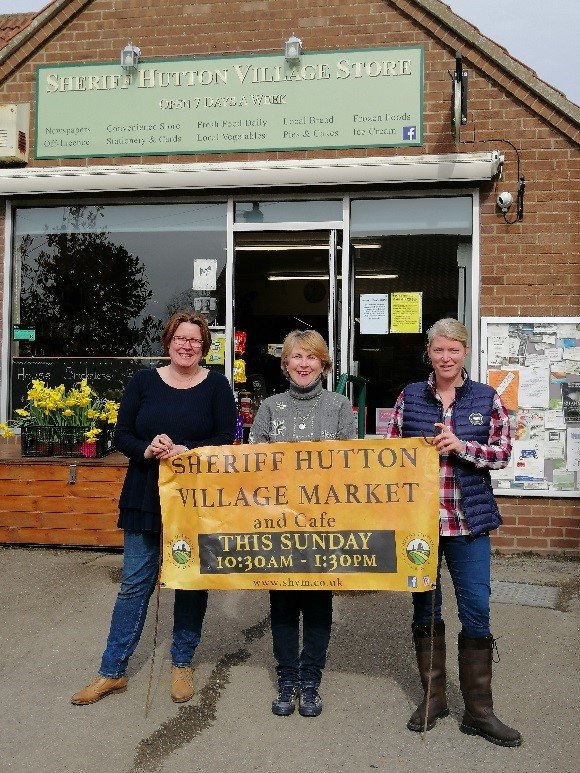 The idea of a volunteer support group grew out of a conversation and some key members of organisations made an initial movement to create the group. These were the two churches in the village (CofE and Methodist), the Sheriff Hutton Parish Council, the Village Shop and Post Office and The Village Market.

Those groups shared the idea and members of each shared and developed thoughts. From those discussions one person took a lead to use social media to spread the idea to see if there were people who were willing to be volunteers. All of this took place to a background of fast moving changes in advice from government, which needed to be reacted to and changes made to operations and personnel.

A Facebook page and a Whatsapp group were set up with those being shared wider and wider as the days went on. Essentially, the volunteers came from word of mouth and those who were using social media. Sheriff Hutton and Lilling are villages with a population of about 1100 and from that in the space of about 10 days, well over 80 Village Volunteers emerged. It was essential that in the context of the coronavirus that what was being asked of the Village Volunteers was made clear early on. No-one was being asked to make face to face contact with anyone else, or to enter their homes for any reason.

Their tasks were to collect supplies, post and medical items and deliver them by arrangement to a doorstep. Some Volunteers who were either over 70 or who wished to volunteer in a different way, became ‘phone volunteers. They are there to be on the end of the phone to chat and make personal contact. Anything else was to be referred on to the main coordinator.

From there A5 cards were designed, printed and distributed to every household in the two parishes explaining what the Village Volunteers could do and how to contact them. At the same time the Village Volunteers were organised into sub-groups, each with a group leader. These groups were generally of 5 or 6. Each sub-group was assigned to a street or an area. This is often in the area in which they live, so that they are already known to the residents. They communicated through emails and Whatsapp groups.

The central coordinator kept a complete list of all the contact data necessary and ensured it was being stored within the law. Later in the process, one of the Volunteers produced badges for the Volunteers which were distributed via the groups. These ensure that the residents could see them through a window and know that the Volunteer was from the Village Volunteers

Flyers from the Village Market organisers

At the same time the Village Market organisers worked with local businesses to produce an A4 sheet which gave residents an idea of which businesses and services were still operating and which were offering take away or deliveries of food, drink and goods. This was delivered with the Village News, by their organisation, to all households in the two villages.

In the background, one of the Volunteers was developing relationships with North Yorkshire County Council, Ryedale District Council. Then feeding their information and advice to the central coordinator who shared it with all of the Village Volunteers. The Councils were providing advice from Government departments formalizing longer term policies and also support at our level.

In a such a fast-moving scenario it was always possible for overlapping of provision, but regular conversations between partners eased any issues.

So, as we approached Easter with the villages locked down and residents told to stay at home, the Sheriff Hutton Coronavirus Support Group had reached a membership of over 80. New initiatives included advice on the use of social media and video conferencing to connect families unable to communicate beyond the telephone and also a protocol for collecting medication were drafted.

Government directed initiatives to provide direct support for the vulnerable including vouchers available to alleviate food poverty will be brought into use within weeks and local delivery is proposed.

Contact was also made with local radio, in particular Radio York and also the local press in particular Handymag, The Gazette and Herald, and The Press.

There is a general feeling that the setting up of a group such as ours will lead to greater social cohesion and friendship within our villages as we work locally against a background of a regional, national and international pandemic.

As with all such things in life it is good to have something positive to look forward to, so we are already planning to have a, large and very cheerful, “street party”, to celebrate when our lives are safe and virus free.

Saint Catherine’s set to reopen its next six charity shops...

“THAT SYNCHING FEELING!” with the Wilberforce Trust

Get involved this Christian Aid Week!

Jolly Good Takeaways from The Jolly Farmers in Leavening

Duncombe Sawmill is open for business

Could you offer ‘help at home’ to people in your...

Information and help for residents in Hovingham area